Patricia Tellis volunteers with the 82nd Montreal Guiding Unit that has girls from Sparks to Pathfinders. Recently they decided to run the Candy Chemistry Meeting-in-a-Box and had a sweet time! Here’s what she had to say:

We started all together with the introduction and discussion part.  The girls had a lot to say about science and experiments!  Apparently the all LOVE science.. YAY!

Following the discussion, we split off into branch groups. The Guides and Pathfinders did two activities: Starburst Geology & Sink or Float. The Sparks and Brownies did Dancing Gummy Worms, Sparks in you Mouth, How Many Licks? and Floating M&Ms. 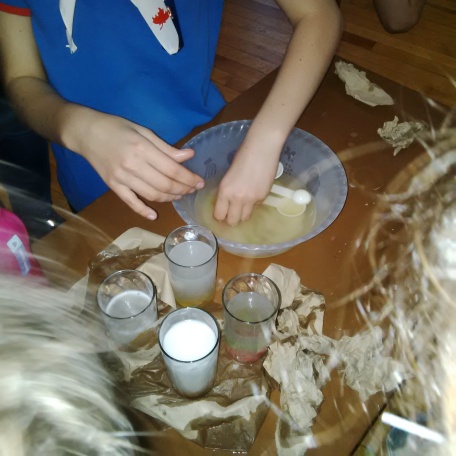 First I had the girls set up the gummy worms to soak in the baking soda solution (a mom helper and I had sliced up the worms before the meeting). Next we set up M&Ms and Skittles to soak for the floating Ms activity. 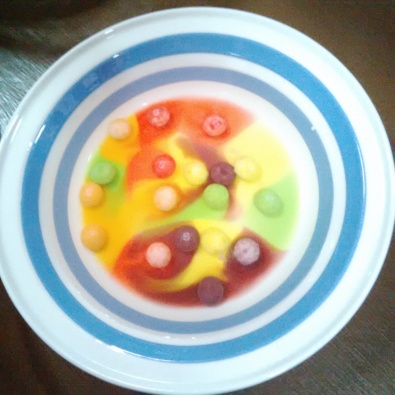 While those experiments were “incubating,” a mom helper took small groups of girls to the furnace room (the darkest room in the whole church) to do the Sparks activity.  It worked for most girls and they loved seeing the sparks however most of the girls hated the taste and spit out the Lifesavers as soon as they returned to the hall. Too funny!

As the girls returned from doing the Sparks activity, they were given a lollipop and told to count the number of licks.  Only the Brownies could do it.  Most of the Sparks lost count after about 20 licks.
By the time all the girls had done the Sparks activity, the M&Ms and Skittles were ready. It was so cool to see the floating Ms and Ss!  The two Mom helpers and I did not know about the edible white paint so we were all amazed! 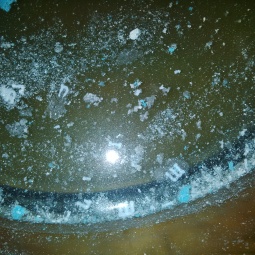 We ended the evening by putting the gummy worms in the vinegar.  The did not really “dance” but the girls were impressed by how much they foamed up!  We used a regular size glass.  If I had used something bigger (e.g. water pitcher/juice jug), it might have been easier to see the worms dance. One of the mother helpers is a kindergarten teacher and has done a similar activity with her class.  She says it it works better if you use warm water to make the baking soda.  That might be something to try for next time!

For anyone else wanting to run this meeting, one point to note is that it is VERY IMPORTANT to have extra candy on hand for the girls to snack on.  For the Sparks, their big concern at first was that all the candy I brought would be used for experiments and they would not get any to eat.  I had to reassure them, that yes I had extra candy and had to give them some gummy worms, before I could proceed with the second experiment.