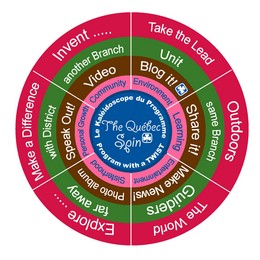 together for a series of experiments and put their own spin on programming! Here’s their Québec Spin story:

Brown circle: VIDEO (DVDs for all!)

Experiment #1: For our gathering activity & snack, at this meeting we made ice cream in zip lock bags. The Sparks joined Brownie Circles, everyone put on mittens and passing the zip lock bags began. Each circle had a choice to make vanilla or chocolate ice cream and everyone had a mini ice cream cone when the mixture was semi-solid. Several bags broke, so we just double bagged and carried on… all part of the fun. In the field behind the school, we gathered to conduct…

Experiment # 2: Vinegar and baking soda-Volcanoes. Each circle worked together and chose a colour for their volcano. Coloured foam flowed over each group’s cup. Watch the video! As you can see from the video, the girls’ first question was, “Can we eat this?”. I guess we shouldn’t have started with an edible experiment.

Experiment # 3: and by far the coolest was the Pepsi & Mentos geysers. Once again each circle prepared their materials and Brown Owl pulled the rip cord combining the Pepsi and Mentos. See video for the spectacular results!

Experiment #4: Back inside the school again, we watched cranberries dance in club soda. Pretty tame after the geysers, but mildly interesting none the less.  Yawn…

Experiment # 5: Expanding snow. It is really the stuff found inside disposable diapers. When you add water, this stuff grows before your very eyes. Each girl had their own cup of water and Brown Owl added a thimble full of snow. Our cups filled with snow. Amazing! The girls took their snow home in baggies. Left to air dry, they can just add water and conduct this experiment again at home.

Learn more about the Québec Spin.

Send us your Québec Spin story! If you are interested in guest blogging, please send us an email at communications@guidesquebec.ca.